The BGS works around the world on geoscience projects. These projects involve the application of BGS geological and environmental expertise in developing countries to help create a geological information system of maps and databases that will underpin the future economic development of a country's resources in water, soil, mineral or energy supply.

Recent BGS Global Geoscience projects include geological mapping in the United Arab Emirates, a national programme of geochemical mapping in Nigeria and a research project with an international team involving plate tectonics and volcanism in the Afar Rift.

These are funded by sources such as the World Bank, foreign governments and private sector, European funding and research funding from the UK, including baseline funding from the Natural Environment Research Council (NERC).

To facilitate our global reach and increase our flexibility in working with clients, BGS has recently created a company which trades as BGS International Ltd. The BGS and other scientists will work in this company in the service sectors of geology.

BGS Global Geoscience will also develop research projects as an added value in association with BGS International when appropriate. 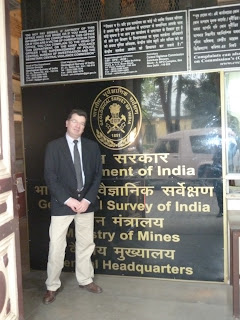 The BGS has not in recent years had a sustained collaborative agreement with the Geological Survey of India (GSI)  and in a recent visit I met with the GSI to discuss future roles for BGS Global Geoscience and that of BGS International.

The GSI rightly argues that India must have large undiscovered resource reserves and compares itself to resource-rich countries such as Canada, South Africa and Australia where resources make up close to 8 per cent of GDP; in India they are less than 2 per cent.

New investments in geological survey should provide the basis for industry to identify target areas of future investment. At the same time any exploitation needs to be completed using state-of-the-art technology and environmental protection.

As a result of my visit, BGS has since sent staff to the GSI to initiate a dialogue on the latest technologies in data management.

The future for GSI, and all geological surveys, will require us increasingly to be linked and networked into large data management systems across the world.

The BGS plays a lead role in Europe in provision of drilling capability for the European arm of the IODP and with the involvement of India we will focus on key targets related to the future hydrocarbon resources in the Indian marine shelf and also in the Indian Ocean in general.

We will also try and solve some fundamental questions related to transport of sediments from the Himalayas to the Indian Ocean and the rate of uplift and erosion of the Himalayan Mountains providing us with clues to how the mountain range was formed.

The BGS through its Global Geoscience  programme will develop new initiatives in India, which still has, hidden in its landmass, enormous potential in natural resources and also geological discovery in general.
Posted by British Geological Survey at 05:36 No comments: