I have just met with our G-BASE (Geochemical Baseline Survey of the Environment) team before they go off for a 12 weeks sampling campaign. This will be the last concerted sampling effort and then the stream sediment coverage for the United Kingdom will be complete. The process has been on-going for several decades with BGS sampling the whole of the UK which started in Northern Scotland in the late 1960s. 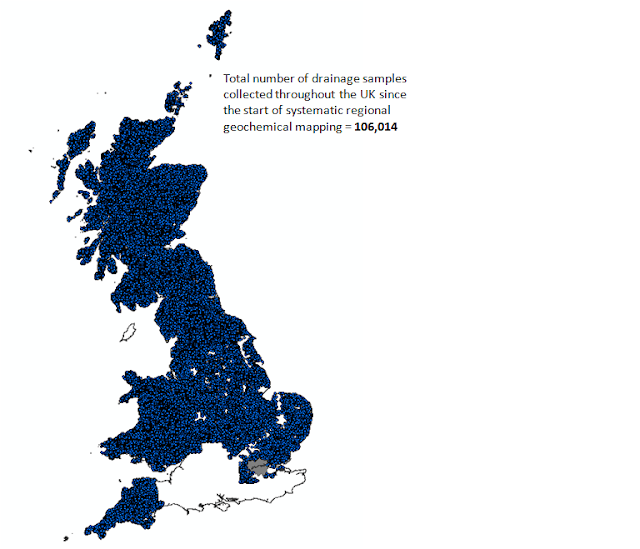 Much of the work underpins environmental assessment in the UK and also across Europe. Regulation and policy around land utilisation and development requires knowledge of the concentrations of chemical elements in soils – for example for Arsenic, Cadmium, Lead. Geochemists know that these values are variable and depend on the composition of the parent material that the soil came from; for example soils formed on granites are very different from those formed on limestone and policy must take this regional variability into account. At the same time there are natural processes that can concentrate elements such as arsenic in soils and water that may mean that the concentrations exceed what one would recommend as an environmental standard and so the natural background must be known and taken into account. On top of this, the levels of some elements e.g. Lead, Chromium, Mercury etc. may be elevated due to industrial activity.

The final samples will be taken on the Isle of Wight in mid September this year at which point we will have a small workshop and reception and will have a lot of data to bring together to make full UK coverage products.
Posted by British Geological Survey at 07:08 No comments: